The Israeli military is equipping its forces with a new range of spy drones small enough to fit in a soldier's backpack, the army said on Thursday. These are equipped with a large variety of tools - nothing like the best cheap drone you can find on eBay for your kid's birthday.

The small unmanned aerial vehicles (UAVs) and micro UAVs were unveiled at a conference on low intensity conflict.

The Israeli air force has often used larger unmanned spy planes to target Palestinian militants in air strikes.  The new baby drones would give army forces in the field near instant access to aerial intelligence.  The planes have already been supplied to some ground units. "We use them to take aerial photographs of the (Palestinian) territories," a military official told Associated Press news agency. 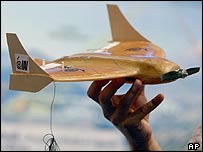 You May Also Enjoy

The new User Authentication Methods Activity report is great. Did you know it has an awesome API as well?

If you are looking to configure Azure AD B2B Direct Federation with Google’s GSuite and running into issues here’s a quick screenshot of how it needs to be s...

Here’s a useful script I wrote the other day. This uses a few PowerShell modules to pull together information about all the Power BI workspaces in your Micro...

Now that Staged Rollout is out of NDA, I can finally talk about one of the projects I’ve been working on for the last twelve months. Why Staged Rollout?